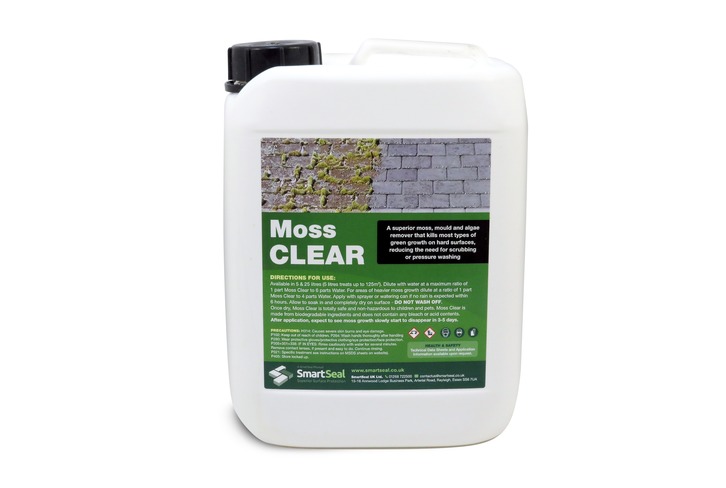 Have used Moss Clear on many occasions before. It works very well to clear moss from block paving joints and will always use again.

By Alan Diaper From Southampton

Very fast acting on medium moss on tarmac. Even in autumn it was only a few days before the moss was obviously dying back

By Rob FJ From Dorset

By Nadeem Ali From Glasgow

Conservatory roof before and after using Moss Clear. Excellent product, and easy to use. Removed years of moss growth in one application. Thoroughly recommended. Would certainly use again.

By David Mayor From Sheffield

I first used SmartSeal roof moss killer two summers ago on the front of the house, leaving part of the roof untreated so that I could compare the 'before and after' side by side. The after image taken clearly showed how pleased I was with the result, so I treated the rest of the roof last summer. Excellent product.

By Robert Sinclair From Berkshire

By Andrew Bellingham From Colchester

Excellent product. The moss had died within a few days. Ive ordered more to cover the rest of my drive!

I've found this removes moss from my drive which other products did not touch. Apply, in my case by watering can, leave and moss will eventually die. Without the need to pressure wash and destroy the surface of the tarmac.

By John Sunderland From Cumbria

Tried other products with varying amounts of success so having tried other Smartseal products thought I'd give this a go, as always Smartseal delivered. Killed the moss and made it easy to get the drive cleaned and re sealed.

The moss clear is an excellent product which I have used successfully on drives, roofs and fences.

Brilliant product cleared moss and algae from my path and drive within a few days.

By Robert Beatson From North Somerset

By Robert Jarvis From Birmingham

Excellent product, doing just what it says on the tin.

Followed the instructions carefully and it has done the job well. Drive was well prepared for the application of the restorer. Need to be patient......allow several days for the product to fully work. I was able to use the left overs to spray the moss on the roof too! I will certainly be repeating the application from time to time to keep the driveway clear.

Thank you for helping me with the moss problem. The customer service was top class.

By Rosemary Hopkins From Harlow

Service excellent goods delivered quickly. However, unable to comment on product not used.

Weather conditions have not been conducive for me to use the product since receiving it, however SmartSeal deserves real credit for their speed of service - the 25-litre product was ordered on a Sunday afternoon & arrived first thing the following Tuesday. Impressive.

Worked like a treat. Killed all the green slime on our natural paving slabs very quickly & almost all the moss...a few areas needed a second treatment but very pleased with this.

Excellent product. Sprayed the roof of our bungalow, killed all the moss in about a week. Just need to brush it off now.

We have used this product several times now on our customers drives and after two coats on 20 year old blocks it does look like you have just laid a new drive . Would definitely recommend.

By Richard Dixey From DixeyClean LTD

By Clive Bramley From Yorkshire

By Andrew McCavish From Wales

By Dean Cheesman From Bedford

This is a great product to use, especially moss clear pro the, benefits are great it can be applied all year round and in low temperatures and once dry is child & pet friendly.

By Kleen Drivez Stuart From Dewsbury

By Elizabeth Atkinson From Guisborough

First time using this product does what it states very pleased with the result.

By Brian From East Cowes Isles of Wight

Yes! it has done what it says on the can. I have used it on my block paving which was only lightly infected by moss and it appears to be working well. I have also applied it to my roof which is of cement tiles which was very much infected by moss, the moss has after 3 days turned a yellow colour and I am just waiting for this to fall away. I'm hoping for the best on this.

By Vernon Nuttall From Thornton-Cleveleys

The best Moss treatment product on the market in our opinion. Makes our life easier when dealing with a moss covered surface as a pre-treatment.

Wow what an amazing product!!! I recently had 90m of sandstone pavers laid, I sealed them straight away with Smartseal sealer but to my horror they were going green with 3mths. I tried jet washing them but the green still didnt come off. A call to smartseal customer services for advice ended with them sending me a sample bottle of their Moss Clear product due to the amount of Paver seal I had previously bought. I was not confident it would work as all you have to do is mix the Moss Clear to the desired strength (I used 3 parts water to 1 part moss clear) then pour it over the affected area and let nature take it course. Well even by the next morning the results were evident, now the whole 90m looks like new again, an amazing product that really really does work wonders. Many thanks.

By Jig From West Lothian

Used MOSS CLEAR at lot,on all different roof types, very good product Delivery always on time and as for help and support well what can I say FIRST CLASS !!

Good product - The moss was thick on our stone slabs, and it is clearly dying after 3 days. Delivery was good, well packaged and on time, but a little expensive.

By Nuki From Mansfield

Does exactly what it says.....and no more: I was amazed to see that tufts of grass survived, but the moss and algae were totally zapped.

By Ally From Midlands

Good product, good price (apart from postage) prompt service. Have a tarmac drive and has done the job well so I can recomend Moss Clear and SmartSeal ... will be visiting you again when the dreded Moss returns!

By Gareth Hughes From Pembrokeshire

Used product on north facing block paved driveway. Varying degrees of algae depending where the sun shines. So, I applied with a watering can 5:1. In the lighter areas the algae disapeared as it dried! In the heaviest areas the area was clear in three days. Very impressed with product and service have ordred more for next time.

Arrived withing 3 days as promised, technical help second to none, applied one coat with sprayer tonight, hopefully in a few days the area will be ready to be washed.

Moss Clear is a moss killer and moss cleaner that has been formulated specially for the purpose of killing moss on all different types of roof tiles. tarmac, drives, patios and brickwork. It is used in a multitude of scenarios, not only to initially kill moss, but also on an ongoing basis to help with prevention of moss. It will remove moss after usually after one heavy application. It works equally effectively as a roof moss remover, moss killer for tarmac and moss remover for patios.

Moss Clear requires no washing off at a high pressure. Moss and Algae that has been treated you should begin to see flake away and turn brown before falling away within a few days. The majority of people opt to leave the moss to degrade by itself over time. If used on a roof , it reduces the risk of damaging the roof tiles via pressure washing. Furthermore, this roof moss cleaner and moss clear can be diluted further which helps with roof moss prevention. After the surface has been cleaned. Moss Clear can be re-applied at any time to the prevent the regrowth of algae and moss spores on tarmac, driveways, patios, walls and roofs.

If using as a moss killer for tarmac surfaces, Moss Clear can be sprayed onto the tarmac and left to take effect. For best results, some light pressure washing may be required after 5-7 days to remove any moss that may have died and turned brown.

To make sure that you receive the best results and optimum effectiveness of the moss and algae remover, moss cleaner and moss killer, dilute the product at a ratio of 1:5 (one part moss clear to five parts water).

One of our 5 litre containers of Moss Clear is able to cover around 100m2 to 125m2. For areas of thicker moss growth an extra application may be required after the initial treatment.

To make sure that the product is applied evenly we advocate application by watering can or pump sprayer.

After drying, Moss Clear leaves an environment which is safe with no toxicity. Moss Clear is also a fully biodegradable formulation which does not contain bleach or acids.

Other products you may require...